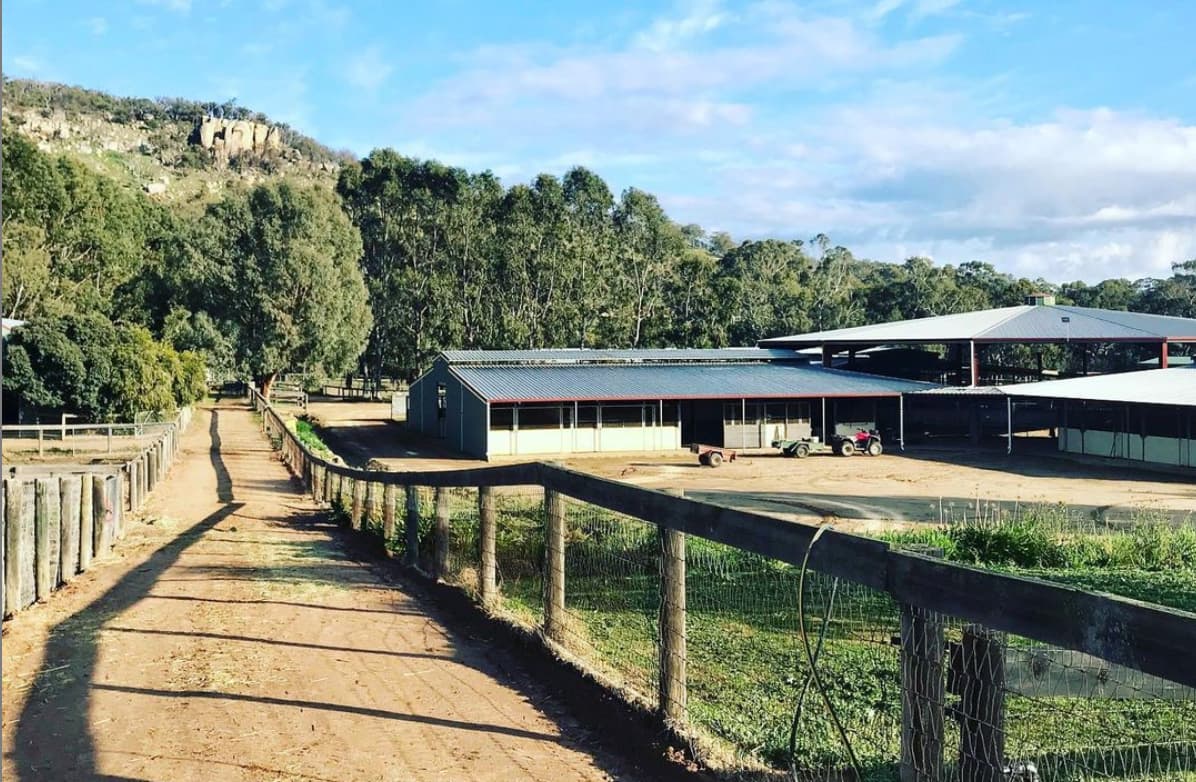 It has already been a big 2021 for Leneva Park, with its latest milestone the announcement of service fees for its two foundation stallions. We caught up with General Manager Mick Sharkie to discuss the road ahead for the burgeoning Victorian breeding operation.

There is a palpable sense of excitement in Leneva Park General Manager Mick Sharkie's voice as he drives the highways of Victoria inspecting prospective broodmares to purchase to support the stud's two stallions, Fierce Impact (Jpn) and Royal Meeting (Ire).

This week Leneva Park, founded by ambitious young businessman Luke Vandersluys as a pre-training business that has now evolved into a breeding operation as well, reached its latest significant milestone, when it confirmed the service fees for Fierce Impact ($16,500 inc GST) and Royal Meeting ($11,000 inc GST) for 2021.

With a strong strategy for growth in place, something Vandersluys has experience with in his burgeoning Countrywide Asphalt business, the time has come for the hard work to be done to ensure that both stallions get the right launching point.

With the prices up on the board, the nominations team are flat out fielding calls from prospective clients, while Sharkie is putting in the miles to assess potential additions to the Leneva Park broodmare band, with the advice of some key mentors very much in the forefront of his mind.

"If you are going to stand stallions, you have to recruit the right mares to send to them. That's something that I've really learned with by friendship with Toby Liston and the Liston family, particularly what they've done in the past 10 years at Three Bridges," Sharkie told TDN AusNZ.

"It was great to be a fly on the wall and sponge all that information off Toby, and experience that journey with them, not knowing that years later, we’d be in a similar position.

"It’s an exciting time but you need to get the method and strategy in place, without getting to caught up in that excitement."

Along with the excitement, there is pressure for Sharkie and his team to deliver on that expectation and they are taking a 'no stone unturned' approach to getting the Leneva Park stallion brand off on the right note, particularly when it comes to foundation stallion, Fierce impact.

"That's why we are doing the legwork, going around looking at these broodmares and doing the pedigree work and getting experts in that field to assist us to get off on the right foot. We want to make sure that in the first year, while numbers are important, it’s key to get the right type of horses," he said.

"With Fierce Impact, there is enough exposed information here. There is a lot of pedigree work that has been done on Deep Impact to suggest that there are some really positive leads we should explore. Then when you look at the horse himself, you get an idea on the type of mare that will suit him.

"You do all that homework and you come up with a few ideas about the sort of mares to try. We want to make sure we give him every possible chance. For those who want to book mares to him, we want to have that informed conversation, so they can send the right mares to him. If we can get that part of it right, it will relieve a lot of the pressure."

The discussion around Royal Meeting is a little different, as he has already served a season at the Seymour-based property under the Aquis banner in 2020. Leneva Park assumed the lease on the 500-acre property after Aquis stepped away from Victoria and elected to retain the Group 1-winning son of Invincible Spirit (Ire).

Sharkie believes that with the support of existing shareholders in the stallion, plus Leneva Park's own mares, and repeat business from his first book of 88 mares, Royal Meeting is well-placed to take another step forward.

"We’ve had some good discussions with the shareholders in Royal Meeting and a lot of them are Victorian-based and they are keen to keep supporting him. They are also keen to know our plans with the horse and we are going to support him too," he said.

That should mean Leneva Park will be quite active in the upcoming broodmare sales at Sydney and on the Gold Coast.

"There is not a magical number we want to buy, but we are a Victorian operation and in the future we want to support to the Inglis Premier Sale," Sharkie said

"Magic Millions are amazing as well, and we sell in Adelaide and one day we want to have strong Gold Coast drafts, but I think starting out, the Premier Sale is the target we want to take.

"We are looking for mares that can get us there. We want to get into Book 1, with strong horses and really commercial horses. That's the starting point for us in the short term."

Sharkie also said it was important that Leneva Park wasn't blinkered in its approach to breeding to sell.

"We haven’t got a huge amount of mares ourselves, so we have had to build those numbers. We are also very conscious we need to be breeding out, not just to our stallions, but also to other stallions as well, in Victoria and in the Hunter. We don't want to have paddocks of Fierce Impacts and Royal Meetings. It's important to have other stuff on offer," he said.

Determining where Fierce Impact, a Japanese-bred, triple Group 1-winning miler, sat in the market in terms of price, was not a straightforward task, but there were some overall principals at play, according to Sharkie.

"The last fortnight we’ve had so many calls regarding Fierce Impact. As soon as peoples' minds start turning to where they want to send their mares, or mares they want to buy at the upcoming sales, it ramps up," he said.

"The owners had an idea that he'd be in between that $15,000 to $20,000 mark for a while now. We sussed out the market, we spoke to some breeders we respect, we spoke to auction houses and contacts and said this is the price we are looking at and they all gave us confidence that $16,500 including GST was the way to go.

"We don't want breeders to have to think twice about it. We want it to be a no-brainer decision for them. First-season a proven performer at an elite level, a great pedigree and being by Deep Impact over an American sprint-mile family, we tick a hell of a lot of boxes. The last one we wanted to tick was value, and I think we've done that."

Royal Meeting's price of $11,000 (inc GST) is a carry-on from what he stood for last year at Aquis, but the challenge with him, given the environment he was introduced to the market at, is getting more people familiar with what he has to offer.

"Brian Byrnes, who has been retained by us from his time at Aquis, did a fantastic job of getting 88 mares to that horse last year given he arrived a week before the season, straight off the track, in the middle of COVID when nobody could really see him," Sharkie said.

"We want to build on that. We want to make his second season a real statement. We want to show people what he looks like, that’s key. If you put a picture of Invincible Spirit next to Royal Meeting, baring a white sock, they are nearly identical.

"They are so similar in type. Their heads are almost identical. He's like the physical clone of his sire. We know how well Invincible Spirit has done out of here."

A window to the future

The success of the 2021 season will be a base off which Leneva Park will look to build from with a larger stallion contingent in the near future.

"I think if we can prove ourselves with these two this year, that gives the market really good positivity that we can add another one or two next year," Sharkie said.

"The market tells you that it wants speed and they are the easiest horse to fill and from the perspective of the balance of the roster, it’s important to get that right. Adding a speed stallion in the next year or two will be important."

Governed by the strategy for scaling the business put in place by Vandersluys, Sharkie will also seek the advice of key mentors in ensuring that growth is sustainable, bouncing ideas off close confidants like the Liston family as well as Anthony Mithen of Rosemont Stud.

"Having Mitho there as someone who came from a non-horse background has been great and what they have managed to do, albeit with a stronger budget than what we have got, is really inspiring," he said.

"I've had some real open and frank conversations with Mitho about the mistakes that they made early days and your eyes are wide open to that. It's similar with the Listons and Three Bridges. That friendship with that family, for me personally, has been invaluable."

Leneva Park enters the stallion market at a very interesting time in Victoria, with the departure of Sun Stud and Aquis and uncertainty over Woodside Park, while Widden has entered the market and Yulong has significantly ramped up its game with the acquisition of Champion stallion Written Tycoon.

The flux in the marketplace is not something which concerns Sharkie, who feels it's an exciting time to be involved.

"I'm a big believer that it's better to have activity than no activity. When you have organisations like Widden opening an arm in Victoria, that speaks to the positivity and the opportunity in the Victorian breeding market," he said.

"Then when you have a horse like Written Tycoon relocating to a relatively new farm like Yulong, that talks to the seriousness of Yulong and that they are here for the long term. That's fantastic. It’s all very good for the Victorian market.

"We are aware that if those bigger guys are making noise and getting attention, it always flows on to all parts of the industry. That positivity only builds and it will benefit everyone."