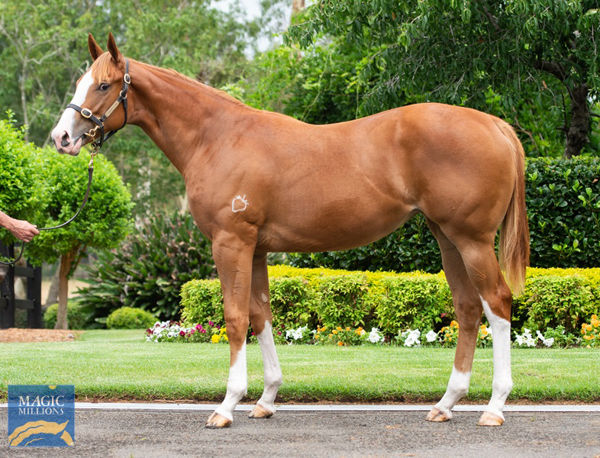 Fillies have been selling like second class citizens at Magic Millions this year in comparison to colts, but Strawberry Hill Stud’s Written Tycoon filly from Magic Millions 2YO Classic winner Karuta Queen bucked the turned when selling for $1.5 million on Thursday.

The flashy chestnut was a showstopper and quickly caught the attention of Victorian bloodstock agent Sheamus Mills, who secured the star filly, now the highest priced yearling for her sire Written Tycoon.

She is the fifth foal of Karuta Queen, who is already the dam of stakes-winner Eawase.

This filly has a two year-old full sister that has been retained by John Singleton and named Pocket Goddess with Lindsay Park to train.

Respected bloodstock agent Duncan Grimley is the long time bloodstock manager and advisor for John Singleton and explains why she was such an exceptional filly. Karuta Queen has a filly foal by Spirit of Boom and went to Zoustar last year.