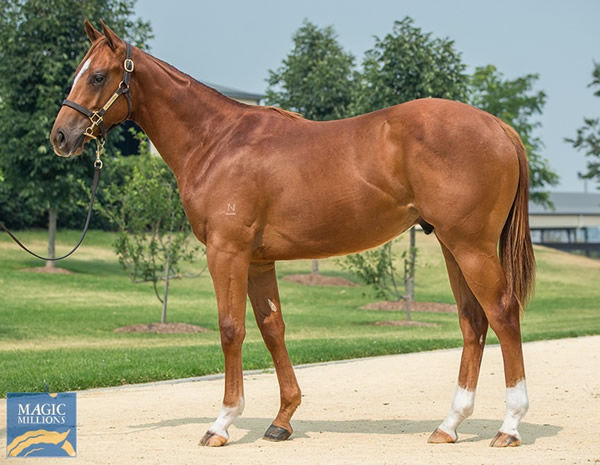 Foaled and raised at Newgate Farm for his breeder Nick Vass, this Capitalist colt from Booklet made a big splash at Magic Millions on Wednesday when selling for $750,000 to James Harron, who purchased his sire from this sale in 2015.

A handsome chestnut stamped unmistakably in the image of his sire, the colt is a half-brother to smart winner Groundbreak and is the third foal of stakes-winning Tale of the Cat (USA) mare Booklet.

Sadly for her owner, Booklet died last year and her final foal is another filly by Capitalist.

Given the knowledge James Harron has of Capitalist it was no surprise to anyone to see him signing the docket for this much admired colt.

“He was my favourite horse on physical and just happened to be by Capitalist and he certainly has a lot of similarities to his sire.

“He looks a ready made 2YO, just like his sire and hopefully he can be back here next year.”

Standing at a fee of $55,000, Capitalist is the most represented of all the first season sires at this sale and the Newgate Farm based son of Written Tycoon is off to a great start with three more sessions of Book 1 to come.