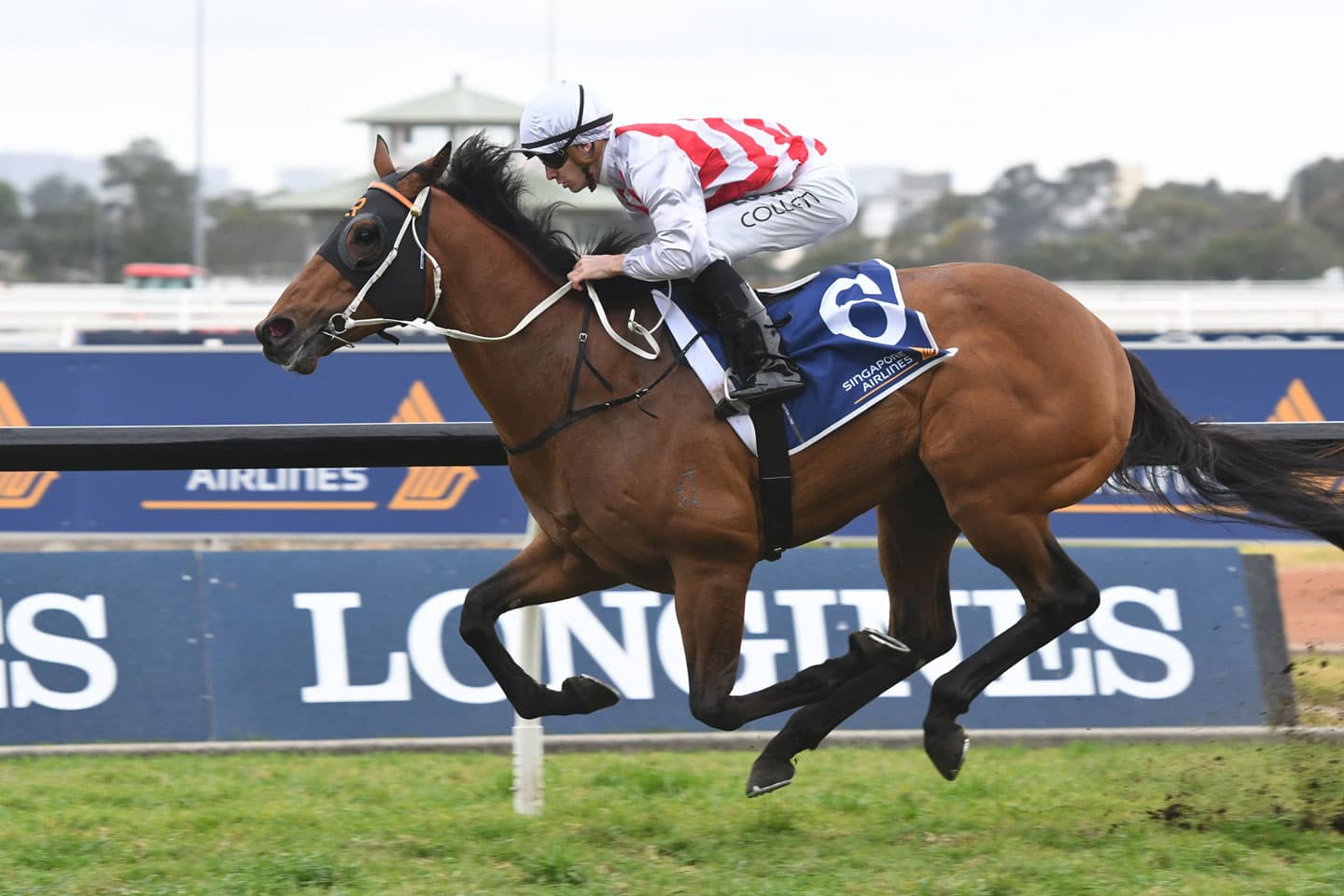 Kitchwin Hills has added a second stallion to its 2021 roster, with confirmation that the Group 2-winning son of Star Witness, Graff, will stand alongside Sooboog.

Graff, a winner of four races, including the G2 Caulfield Sprint and G3 San Domenico S., and placed behind The Autumn Sun and Zousain in the 2018 G1 Golden Rose S., will stand for $13,200 (inc GST).

Kitchwin Hills' Stud Manager Mick Malone was proudly presenting the farm's new acquisition to a group of prominent breeders in the stables adjacent to the Magic Millions Gold Coast sales complex when TDN AusNZ caught up with him.

"It’s only early days, we have just announced him, but he's been received well," he said.

"You will go a long way to see a horse like him. Alan Bell bought him, that should be recommendation enough, but if you have a look at him, he's got such bone and strength.

"He's a beautiful horse. I have kept an eye on him his whole race career. Everyone remembers him. He was probably a horse that at one point, people would have been spruiking him as a $10 to $20 million stallion, and things didn't go his way.

"If it wasn't barriers, it was tracks, but any horse that is undefeated as a 2-year-old and then comes out at his first start as a 3-year-old and wins the San Domenico, and then within four starts of that, he is running in The Everest, that shows you what they thought of him."

A star from the start

Graff's trainer Kris Lees was full of praise for the colt after that San Domenico win, proclaiming him as, 'the best colt I’ve had anything to do with'.

Noted judge Alan Bell paid $200,000 for him as a yearling from the Widden Stud draft at the 2017 Magic Millions Gold Coast Yearling Sale and said he made a considerable impression, Bell recalled to TDN AusNZ in 2018.

"He was just a great individual, he was just very powerful. He was very correct, and he was great-boned horse. He moved very well and I liked his pedigree," Bell said.

Graff was bred by B2B Bloodstock and is out of the Group 3 winner Dinkum Diamond (Keep The Faith), who is the half-sister to Group 3 winner Dawn Passage (Dawn Approach {Ire}) and has also produced Graff's sister, the stakes placegetter Steel Diamond.

After that San Domenico win, he would finish second in the G2 Run To The Rose and then a fast-finishing third in the Golden Rose, a run which still captivates Malone.

"I urge anyone to have a look at his run in the Golden Rose and where he came from. The Autumn Sun beat him on the day, and was obviously a superstar racehorse, but it wasn't until I really watched the race a few times that you see how unlucky he was," he said.

"He hooked out about seven wide to get around the bend and The Autumn Sun cut the corner and he got beaten a length by him."

Graff finished a very creditable fifth in The Everest as a 3-year-old and returned in the autumn to run fourth in both the G1 Lightning S. and G1 Newmarket H. In the spring of his 3-year-old season, he ran third in the G3 Concorde S. and fourth in the G2 The Shorts and the G2 Premiere S.

He was purchased by Australian Bloodstock and Aquis in February 2020 and in the Australian Bloodstock colours he won the G2 Caulfield Sprint in his first start for Danny O'Brien, beating flying mare Fabergino (Maschino). He ended up under the care of Tony Gollan, finishing down the track in the recent G1 Doomben 10,000 in his last run.

The power of the outcross

Malone says Graff has the added advantage of being clear of Danehill (USA) in the previous three generations, making him eligible to visit a high-quality selection of broodmares.

"A lot of people wonder why these sons of Fastnet and sons of Exceed And Excel and sons of Snitzel don't get to go on, and often it is because they don’t get to breed in big numbers to the most prolific part of the breeding population, which is Danehill-line mares," he said.

"If you're an outcross horse, you get those mares and you add him in as a tough, Aussie-running horse who has performed in those top races and you get such a great chance.

"This horse was 0.5l off being a stallion that every single person in the country wanted to be involved in. I urge everyone to get involved and think about him."

He joins Kitchwin Hills' rising star Sooboog, whose first crop has made an excellent start on the racetrack, with nine winners to date.

"He's had nine winners from 23 runners and is sitting third on the first-season sires' list on winners behind Capitalist and Star Turn. Sooboog is a stallion that really gives you a good type. He's that really good physical, like Graff, and he's done a terrific job. He just needs that good horse to pop up and the rest will be history," Malone said.

It’s been a very good fortnight in the sales ring at Magic Millions for Kitchwin Hills, who sold 12 weanlings for $1.683 million at the National Weanling Sale last week and backed that up with $1.737 million in sales across nine mares at the Magic Millions National Broodmare Sale.

Malone has been largely happy to sell and not buy.

"It's been a massive Sale. I've played no role buying. If I have, I've thrown a few left jabs but haven't let a right go. It's just a really, really strong market and it’s a beautiful industry to be a part of at the moment," he said.

In terms of searching for mares for the Kitchwin Hills band, be it for Graff, Sooboog or for other breeding options, Malone is happy to shop privately this year.

"I've told a lot of my owners that we showed interest to buy here the first day or so, but we were quick to realise that buying was going to be tough. When you get to these types of markets, you tend to have a lot of horses then offered up privately, because people see the results coming through," he said.

"A lot of mares tend to flush out now, so we will be sniffing around trying to find mares privately."