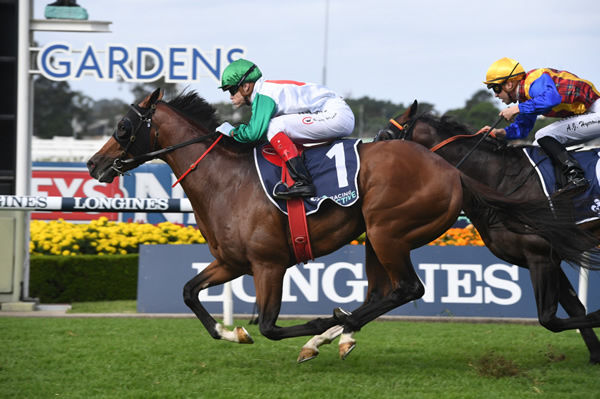 Outstanding 3YO Castelvecchio today won the G1 Rosehill Guineas but his owner Ottavio Galletta is already eyeing off more top-level success over the next month.

“It’s terrific, he’s a terrific horse, and now he’s going to win the Derby and the Queen Elizabeth,’’ Galletta, who bought Castelvecchio at the 2018 Classic Yearling Sale for $150,000 from Arrowfield Stud, said.

“And then the Cox Plate later in the year. He’s only going to get better over more ground.

“Last start, many said he was disappointing but it was too short for him, he had a lot of inconveniencies and knocks. You only need to look at the stewards’ report to know to forget about it.

“Today, out to 2000m and ridden perfectly just off the speed by Craig [Williams], he’s back. Although we knew he’d never gone anywhere anyway.’’

It was a first 3YO G1 for the Richard Litt-trained Castelvecchio (pictured), who twice finished second at the top level in the spring including behind one of the world’s best gallopers Lys Gracieux in the Cox Plate.

John Messara of Arrowfield Stud, who not only offered the horse but has since bought back into the ownership, was “absolutely thrilled but not surprised’’ with today’s result.

“Remember, this is a colt that had a really significant 2YO career, winning on debut, winning the Inglis Millennium over 1200m so brilliantly before a dominant Group 1 victory in the Champagne,’’ Messara said.

“Then he made that huge step in the spring to run second to one of the world’s very best in the Cox Plate and now he’s returned to emulate his sire Dundeel as a Rosehill Guineas winner.

“All of that marks him out as a very special colt and I believe there’s more to come.

Castelvecchio is one of 44 G1-winning Inglis graduates since 2018, more than double our nearest competitor.