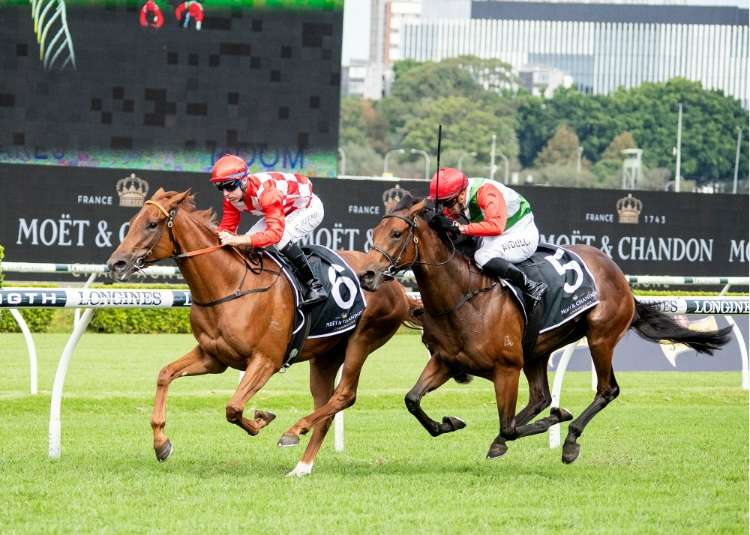 For the second time, Anthony Cummings and his son James have both celebrated Group 1 victories on a single afternoon.

Father and son to the fore

The Cummings clan had a day to remember at Randwick on Saturday, with Anthony Cummings and his son James both training Group 1 winners.

“When I won the Stradbroke with Trekking and Dad won the JJ Atkins S. with Prince Fawaz, Bruce McAvaney told me it was the first time in Australian history that it had ever been done,” James Cummings said on Saturday.

In the countdown to Saturday’s G1 Moet & Chandon Champagne S. at Randwick, all eyes were on Fireburn (Rebel Dane) and her date with destiny – but She’s Extreme (Extreme Choice) had other ideas.

A super-impressive winner of the Golden Slipper and Sires’ Produce S., the Gary Portelli-trained Fireburn stepped out on to Randwick as a $1.50 favourite to become only the seventh winner of Sydney’s 2-year-old Triple Crown.

No horse had accomplished the famous feat since Pierro in 2012, and the 1992 heroine Burst (Marauding {NZ}) is the only filly to ever join the exclusive club. Thanks to She’s Extreme crashing the party on Saturday and extinguishing Fireburn’s sensational winning streak, that remains the case.

Beaten by 1.5l by Fireburn in the Sires’ Produce S. two weeks ago, She’s Extreme turned the tables on Saturday with a relentless front-running performance.

Sent straight to the lead by jockey Tommy Berry, She’s Extreme controlled the race from the front and then threw down the gauntlet with a fierce kick at the top of the straight.

Fireburn gave her all to try to run her down, but She’s Extreme never wavered and maintained a margin of 0.39l at the finish. Williamsburg (Snitzel) was third, more than 5l behind the first pair.

“It really broke my heart when Fireburn went past me the other day, and it broke it even more when Brenton (Avdulla) gave me a wave,” Berry said. “I think it definitely broke her heart as well. It’s hard for a horse to chase, especially a young horse, when another horse goes past you so quickly.

“When we got an easy time early today, which we always looked like getting on paper, I didn’t want to give Brenton any chance to get next to me. I probably got Fireburn out of her comfort zone today, and that was a winning move.

“It’s a great feeling when you go out with a plan and it comes off, and I’ve got to say her work on Tuesday morning was as good as they work.”

"I probably got Fireburn out of her comfort zone today, and that was a winning move." - Tommy Berry

“She did it,” an emotional Cummings said. “It was as simple as working her to her pedigree. With a stayer’s pedigree, when you’re working them for short races to try to keep them fresh, they can do it, but they don’t do it as well.

"As soon as you flick the switch and you start to work them to their pedigree, they get stronger, and that’s what she (She's Extreme) did. The two weeks in between, she put on weight and just showed herself." - Anthony Cummings