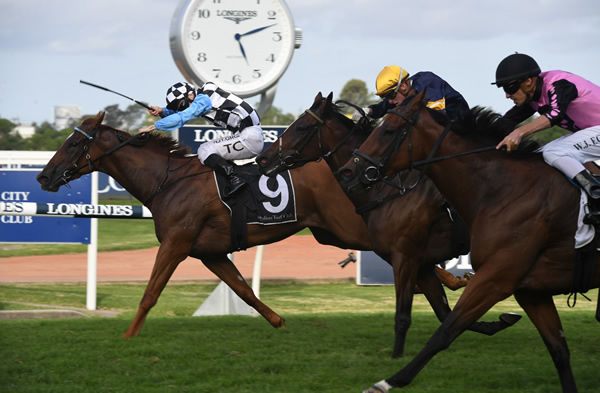 "I've had runners in Group 1 races and run placings and so forth but getting that first win is very special and it's good for a good group of owners who have supported me," said her t rainer David Pfieffer, celebrating his first Group I winner.

"It's a great result, I was confident that the horse was going probably the best of her career.

"I suppose coming up the inside it's probably not the right part of the track, but she toughed it right out.

"She's a great mare, she has a real racehorse attitude and it is a real pleasure having her around the stables. I don't want to say she trains herself because I don't want her taken off me, but I wish every horse had her mentality and attitude."

Retained to race by her breeders, I Am Excited was foaled and raised at Bell River Thoroughbreds and has the overall record of seven wins and nine placings from 27 starts with prizemoney of $1.2million.

A three-sister to the Group III VRC Frances Tressady Stakes winner Flippant, who is by Snitzel’s half-brother Hinchinbrook, I Am Excited is the second stakes-winner from the first three foals of the General Nediym mare Lady Beckworth.

Purchased by Newgate Farm's Henry Field, on behalf of SF Bloodstock, for $400,000 at the 2016 Bell River Thoroughbreds dispersal, Lady Beckworth is a half-sister to Regard, whose only two foals were the superstar multiple Group I winner Atlantic Jewel and Group I winner Commanding Jewel.

I Am Excited is the 14th Group I winner for Snitzel and is his third winner of the The Galaxy joining Sweet Idea and Russian Revolution.