Snitzel’s fourth consecutive General Sires’ Premiership, won with $17.8 million prizemoney, more than $2 million clear of I Am Invincible and Pierro,  confirms Arrowfield’s superstar as the dominant Australian sire of his era. 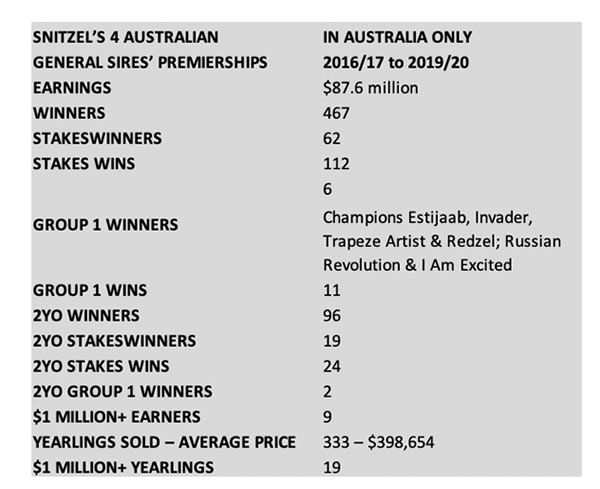 Off the back of a stakes double from his progeny over the weekend, Written Tycoon's debut book at Arrowfield Stud is already full with breeders taking advantage of his recent relocation from Victoria.

Impressive sprinter Dirty Work became Written Tycoon's 34th stakes winner with his easy victory in the Listed Ortensia S. at Rosehill for Spendthrift, while Hightail added a second career stakes win to his resume in the G3 Gold Coast Guineas, shining a spotlight on their sire only a few weeks after it was confirmed he would move from Woodside Park.

Arrowfield Bloodstock Manager Jon Freyer said Written Tycoon had settled in well in the Hunter Valley and breeders had wasted no time locking him in at his 2020 service fee of $77,000 (inc GST).

Group  2-winning  sprinter  Cosmic  Force  will  become  the  first  son  of Deep Field (Northern Meteor) to  stand at stud when he joins his sire on the Newgate Farm roster this spring, commanding a fee of $16,500 (inc GST).

Deep  Field,  who  was  retired  to  Newgate Farm in 2015, has had two crops to race so far. He currently leads the Australian second seaso sires table by winners, while he is also the leading overall sire of three-year-old winners in Australia this season.

His  talent as a stallion was once again to the fore on Saturday when his daughter Xilong won the Euclase Stakes (Gr 2, 1200m), stamping herself  as a genuine contender for The Goodwood (Gr 1, 1200m) Saturday week, while Fituese made it four wins from six starts with an emphatic win on the Kensington track at Randwick.