Reams of reminiscence has already rolled off the digital presses in memory of Redoute’s Choice, the equine king of Arrowfield Stud, since his sudden death was announced on Tuesday. Predictably, those close to the great horse have had some truly moving things to say about the big bay, and what he meant to the industry.

I can’t claim to have anything near the association of these luminaries, but Redoute’s Choice’s death moved me in ways that shocked me.

As a humble TV hack during my SKY Racing days, I pointed cameras in his direction, gave him the odd pat and joined the legion of racing and breeding fans to pull on his tongue. I was never ‘close’ to the horse, but he certainly impacted my life.

I remember as a teenager, watching this big, leggy, Danehill colt win at Caulfield on debut. He had caught my eye in the paper, I was a pedigree nerd, and this guy had pedigree for days. He was also an eyeful, owing to the alchemy of Danehill,Canny Lad, Nijinsky and Best In Show. However, once he started to run, his ancestry was academic for me.

John Berry celebrates the life of Champion racehorse and stallion, Redoute's Choice, who will be remembered as much for his character and class as the incredible legacy he has left behind.

During his very successful training career, Rick Hore-Lacy built up a reputation as ‘the stallion-maker’. Many of the good colts who passed through his hands at Epsom and then at Caulfield went on to enjoy excellent stud careers.

He must have thought that he’d reached the pinnacle in this respect when the 1990 G1 Golden Slipper S. winner Canny Lad (Bletchingly) became an extremely successful stallion at Woodlands. However, it turned out that Canny Lad was only the warm-up act: Redoute’s Choice (Danehill {USA}) came along nine years later and went on to prove himself one of the most special horses, both on the racecourse and at stud, of the modern era.

His death this week at Arrowfield at the age of 22 leaves a big hole in the bloodstock landscape. 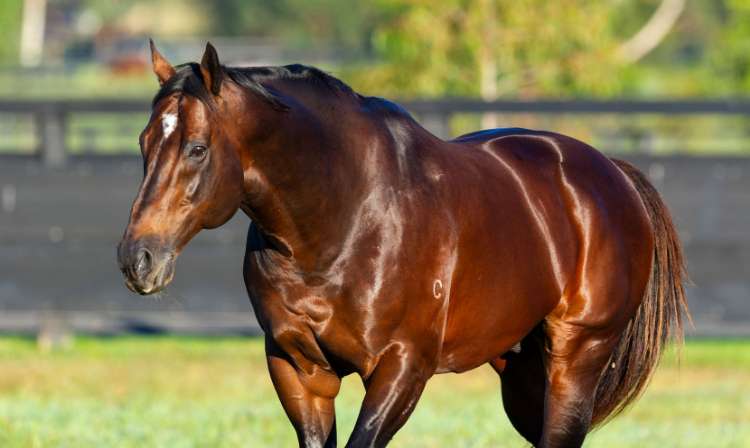 The $2 million ATC Inglis Millennium 1200m RL was introduced to Sydney racegoers in the most spectacular fashion when Ottavio & Wendy Galletta’s Arrowfield-bred colt Castelvecchio rocketed to victory from the back of the field at Warwick Farm on Saturday afternoon.

It was a performance previewed by the Dundeel colt’s startling debut win at Canterbury last month but even so, it surprised his young Warwick Farm-based trainer Richard Litt.

“This horse is the real deal. He just does everything so easy. We never push him. “He came here today not even revved up for this. He’s had two gallops, and they weren’t big gallops, coming into this.

The 11th foal of his dam St. Therese, Castelvecchio was sold at the 2018 Inglis Classic Sale. (PHOTO: Georgie Lomax)

For Litt and the Gallettas, the win and the $1,194,000 prizemoney is a classic racing fairytale.

The trio selected the Dundeel-St. Therese colt from Arrowfield’s 2018 Inglis Classic draft and paid $150,000 for him. Named Castelvecchio (Italian for “old castle”) after a famous museum in Verona, he showed early ability and trialled in September but was given time to develop further before his 18 January debut.

Bred by Arrowfield & John Leaver, Atyaab was bought for $260,000 by Shadwell Stud from the Stud’s 2017 Inglis Easter draft and is trained by Mike de Kock. He is Dundeel’s fourth stakeswinner and the fourth Group 1 winner to emerge – so far – from Arrowfield’s Class of 2017, after The Autumn Sun, Estijaab & Maid Of Heaven. The colt’s dam is the now 21 year-old multiple Group 2 winner Sylvaner (by Danasinga), whose late-career fertility and success, following her early stakeswinner Vesper, can be credited to both the care and the opportunities she’s received at Arrowfield. Sylvaner has a 2YO Dundeel filly (a $100,000 Inglis Easter purchase for the Bulla Thoroughbreds Trust), a 2018 Dundeel colt and a positive test to the six-time Group 1 winner.

It may not have been the dominant win fans were hoping for, however, The Autumn Sun made a successful return to racing in Saturday's Group II Hobartville Stakes (1400m) at Rosehill.

Given plenty of time to find his feet under Kerrin McEvoy, The Autumn Sun came from the tail of the six-horse field to run down a defiant Vegadaze by a long-neck, handing the Lope de Vega gelding his first defeat in four starts. (image Steve Hart) .

John Messara's Arrowfield Stud had acquired a 50 per cent interest in the Redoute's Choice colt on the eve of the Group 1 Caulfield Guineas (1600m) last October, which he won by four and a half lengths, his third win at the highest level.

Arrowfield bred and sold the handsome colt in partnership with The Aga Khan Studs.

"It's hard to make up ground today on the soft track and he has done what he had to do," Waller told AAP.